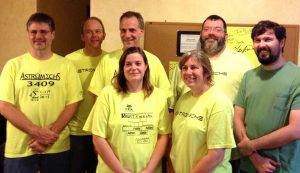 We began informally as a group of friends and families who, in 2006, started a FIRST LEGO League robotics team to provide an exciting technology activity for our kids and their friends.   As our kids grew, so did their interest in robotics.  Over the years our families have expanded to field teams in FIRST LEGO League Jr and FIRST Tech Challenge  and have helped start other FLL teams throughout the Kansas City Area, serving home-schooled, public-schooled and private-schooled kids who otherwise would not be able to do robotics.

In 2014, a group of parents decided to formalize our association and form a Missouri non-profit corporation, with the aim to expand our hands-on robotics and technology programs and competitive team opportunities to more young people and families in the Kansas City area.  We also received designation by the IRS as a public charity under Internal Revenue Code Section 501(c)(3).

Our primary location is near Parkville, Missouri, however we serve public-schooled, home-schooled and private-schooled students and their families on both the Missouri and Kansas side of the state line from Kansas City, Smithville, Gladstone, North Kansas City, and Overland Park.