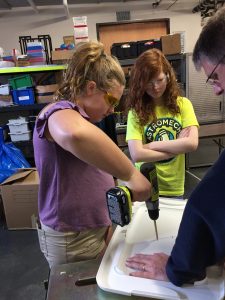 A large part of what we do is mentor community-based competitive robotics teams and coaches at the elementary, middle school and high school levels through the FIRST family of programs.   At each level, kids create robots to play the game which is announced annually.   By having experienced kids mentor other kids. students grow their skills and knowledge.  By having experienced adult coaches mentor other adult coaches, the adults serve with great confidence and competence and and as a result more kids can participate in effective STEM programs.

We also develop and conduct hands-on STEM programs for Girl Scouts, Boy Scouts and other youth organizations to inspire kids to learn more.

FIRST Tech Challenge is for students from grades 7-12. Presently we sponsor five FTC teams in the Kansas City area, three in the Northland and two in Johnson County on the Kansas side of the city.  Our teams are comprised of public-schooled and home-schooled kids.  And in total 62% of our team members are female.

In this program for kids ages 9-14, students use LEGOs and a LEGO Mindstorms EV3 to build a robot to play a game.  They also complete a science-fair like project which matches the theme for a given season.    For the 2019-20 season, we have two teams meeting in the Northland in Kansas City:  The Astromechs FLL 25094 and the Northland Engineering Research and Design Squad (NERDS) FLL 47838.  Click here learn more about FIRST LEGO League.  The NERDS were the winners of the Core Values Inspiration Award and the Astromechs FLL performed well all around at their Qualifier and have advanced to the Kansas City Regional FLL Championships in January 2020.