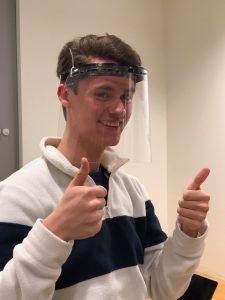 The Astromechs have asked other robotics teams, businesses and 3D printing enthusiasts to help by 3D printing the top portion of the Prusa Protective Face Shield RC2.   On the left is Astromechs member, Sajon Seaberg, modeling on of their first prototypes for KU Medical Center.   The team gathered the materials and assembled 800 such face shields for KU Med 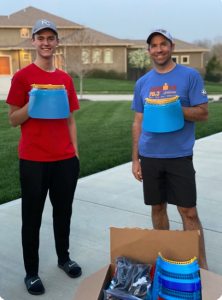 and then started received requests from other groups desperate PPE.

Initially the team could not get more of the front facing film and had difficulty acquiring 3/4″ elastic for securing the headband.  After some internet research, the team found that others, including the National Institutes for Health, had made effective face shields using clear report covers and overhead projector transparencies for the front shield.   So they made over 115 face 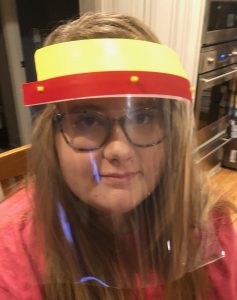 shields for groups who had nothing using report covers as the shield.   This involved much use of a hole-punch.

When elastic bands were unavailable, the team tied rubber bands together to make an adjustable band to secure the face shield frame.  This was a good stop gap until more supplies could be found.

Here are the teams who have been represented in this effort with Astromechs to provide parts for face shields:
Park Hill Trobots FRC #5013
Park Hill South EMP #
Probots FTC #16446
Telsa’s Knights FTC 10127
Galactech FTC #5227
Voltron Robotics in Lansing, KS
Lee’s Summit North Team 1987
FTC Team 16298
FRC Team 1982
Team Titanium FRC 1986
Team 7065
FRC 1108 – Paola
Astromechs FLL #25094
Team Chargers FTC 9808
We want to give a special shout-out to the Camdenton FIRST LASER teams for their collaboration in getting face shield fronts to us and allowing us to help them fill their order for 400 face shields for the U.S. Army!
We are so thankful to Mrs Turner at North Kansas City School District’s SAGE Center for helping us get those first 800 shields cut.
If you would like to receive PPE from our group, please contact via the Astromechs’ Facebook page  or info@kcastromechs.org.